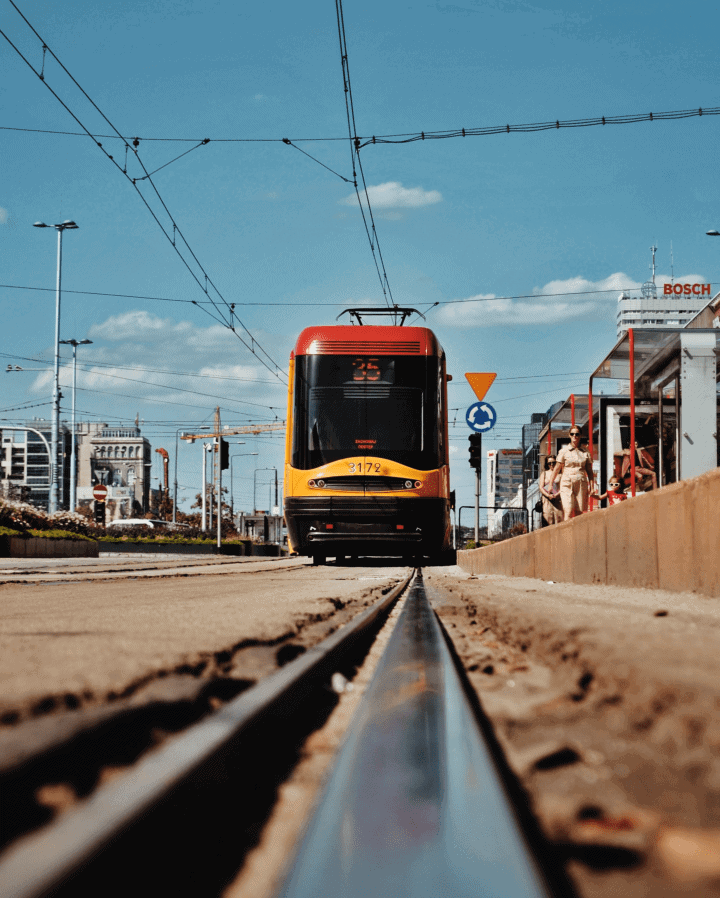 Restarting after Covid restrictions in Central Europe: the examples of Poland, Croatia, Hungary and Romania has been written by B.F.G. Fabrègue and reviewed by the reviewing committee on the 12th of June,.

Central EU economies are projected to grow by 3.6 percent this year and by 3.8 percent in 2022, as the effects of the pandemic gradually disappear. The consequences are major so far: Covid is expected to erase at least five years of per capita income gains in several of the region’s economies and raise the poverty headcount, mainly because of job losses. Despite the rebound in growth, the recovery in per capita gross domestic product (GDP) of the region is subdued and below pre-pandemic trends. COVID has put the break on many economic activities and has sent essentially all economies into recession. One of the most important factors that determine how strong the pandemic affects an economy is the extent to which a country is dependent on tourism.  In this paper, we study how the Covid has affected the economies, how the government reacted and how will the economy restart right after.

Resilience, but not resistance 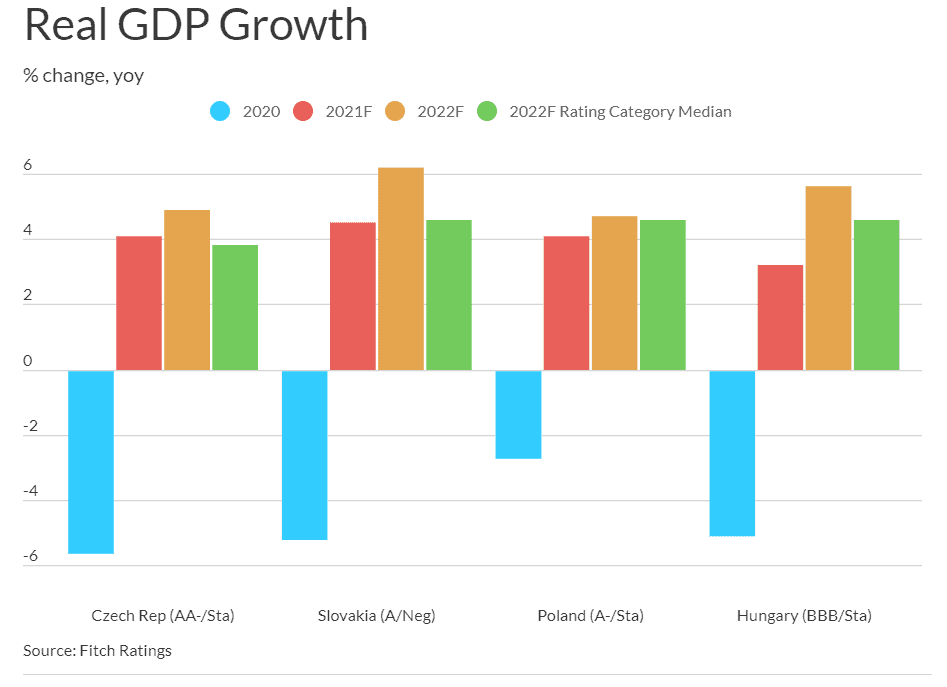 A FitchRating analysis[1] even elaborates on economic resilience demonstrated by most Central and Eastern Europe (CEE) economies – and the Visegrad Four (V4) countries in particular – to pandemic-induced restrictions in late 2020. The economic performance of all the V4 countries (Poland, Hungary, Czech Republic and Slovakia) were mainly supplemented mostly aided by strong government consumption and aid and a stable contribution of net exports to growth. For instance, Poland’s net exports contributed 1.1pp to growth, owing to import compression and a recovery in external demand, especially in 2H20.

It is however very important to point out that most countries in Central Europe have known a considerable reduction of economic output, including in small to large companies. While V4 governments have demonstrated their appetite to maintain or expand support programs, aided by the flexibility gained from suspended domestic fiscal rules (with the potential for the suspension of EU-wide rules to be extended into 2022), it is uncertain on how the downfall would have been without government support. 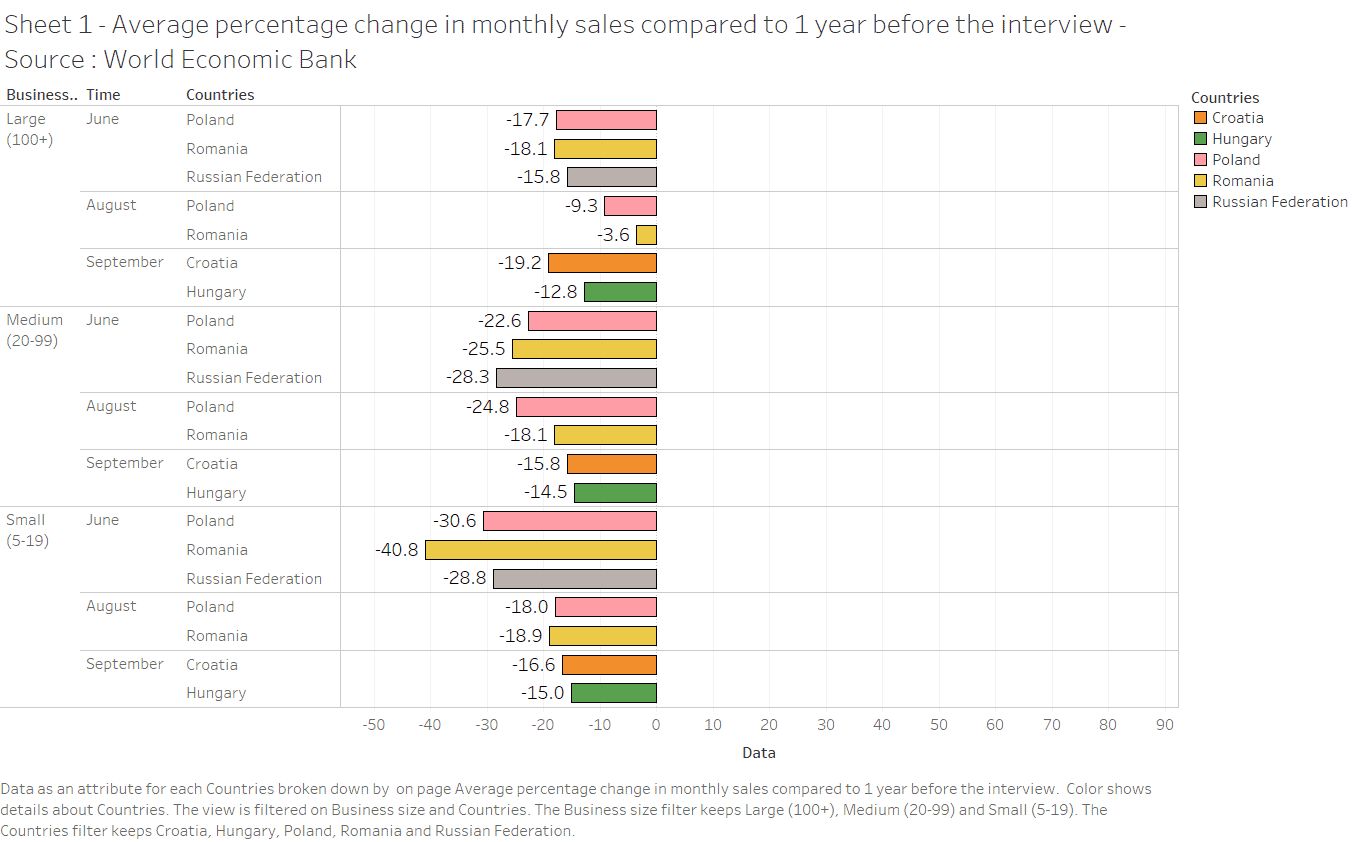 Please note that we have integrated Russian Data in our graphs as a benchmark..

Most significant is the considerable share of companies with a decreasing monthly sales. Notwithstanding government help, numbers are extremely similar inside and outside the EU, the delta being kept under 5 statistical points average. 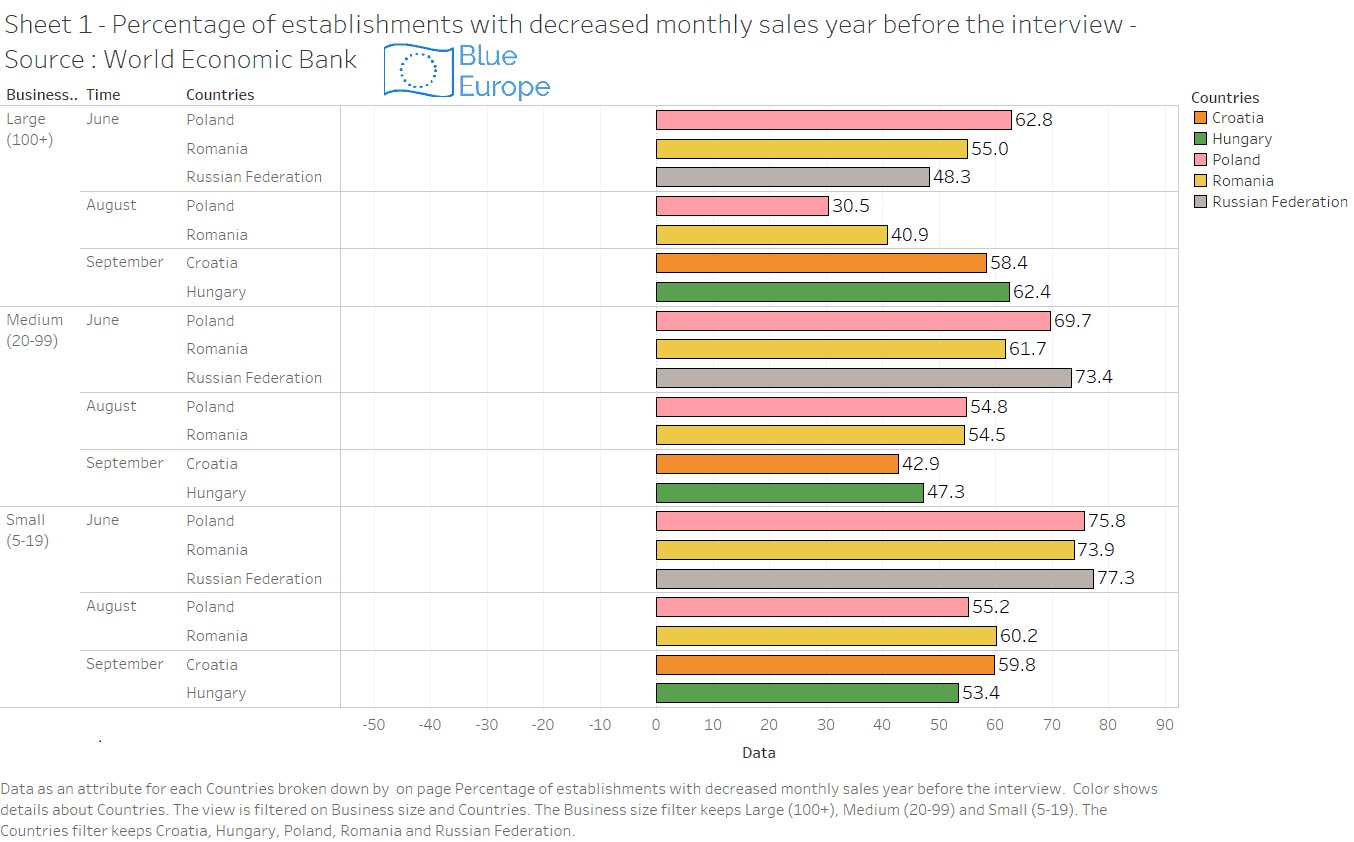 A very wide range of strategies to support the economy

The Polish economy is expected to grow by 3.3 percent in 2021[2], as a recovery in trade in the euro area, combined with improved confidence and a rebound in private consumption and investment . Poland, among all countries in Central and Eastern Europe, has been among the most interventionist, as the following graph shows below. 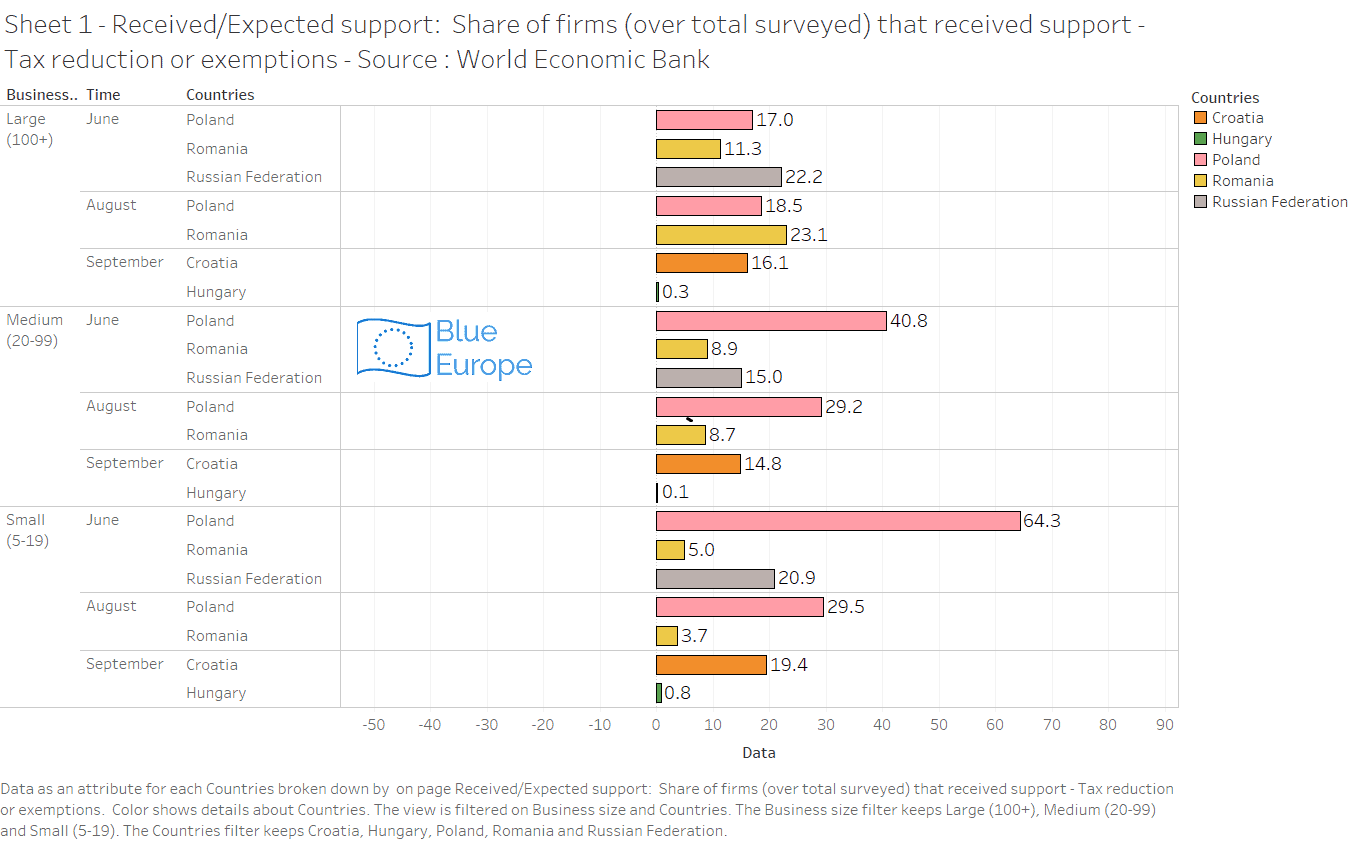 While support being very evenly distributed for large companies, the Polish government has especially supported its medium and small companies by offering massive tax breaks which were, according to the Gazeta, quite efficient. The Polish choice also relied an absence of active decision in the market labor, allowing companies to fire employees. Even compared to an extremely liberal market we chose to include in our paper (Russia), the data is appalling, as almost one third of all companies kept firing all along the year. 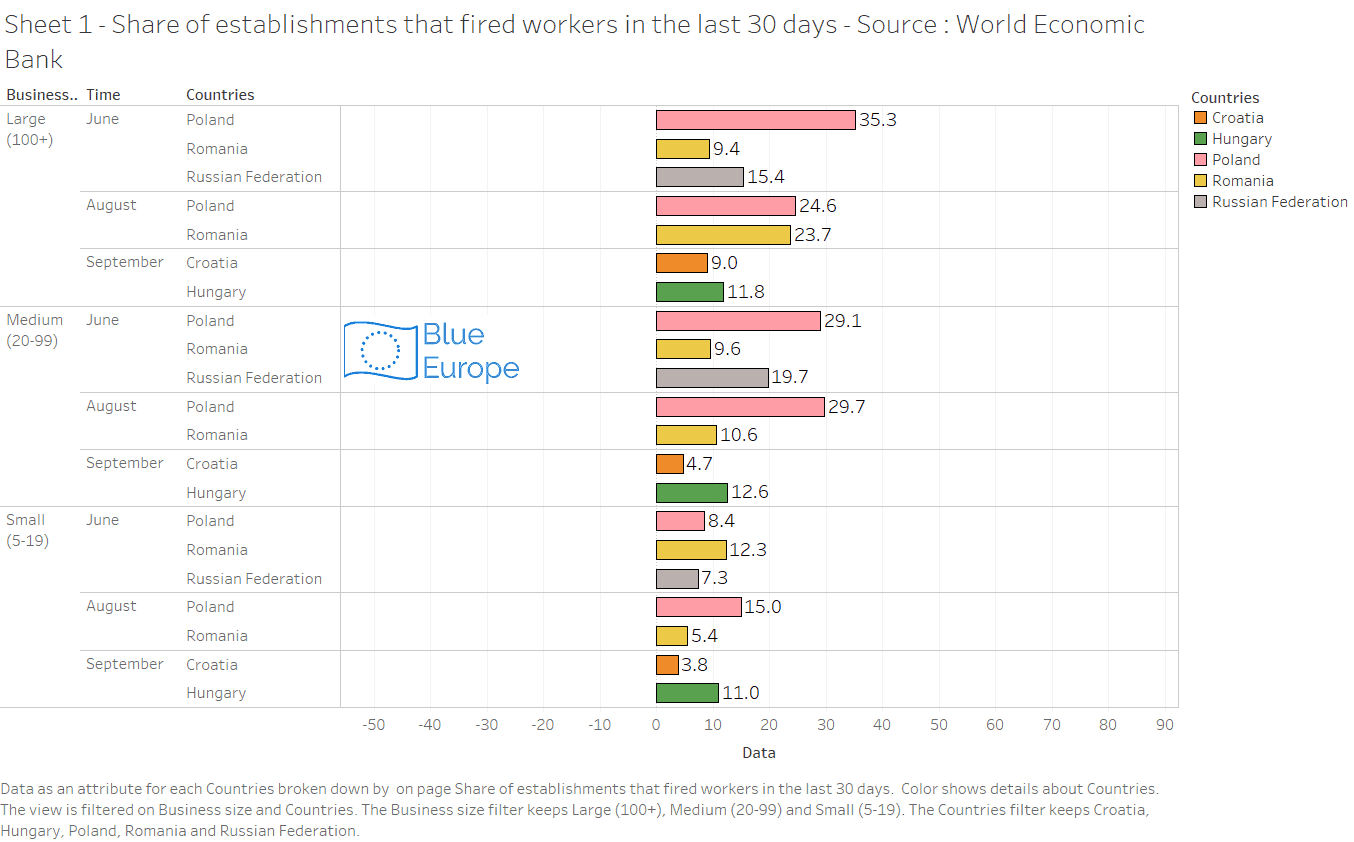 For Poland, the projected rebound in 2021 is weaker than previously anticipated (3.5 percent), mainly do to the Western EU countries not relaxing their restrictions (including for mostly vaccinated countries, such as Spain and the UK).The World Bank offers a similar 2022 projection (3.4 percent), owing in part to a robust rebound in domestic demand, particularly in investment.

“Although Poland’s GDP declined in 2020 for the first time in 30 years, the well-diversified Polish economy is one of Europe’s least affected amid the COVID-19 pandemic,” said Marcus Heinz, World Bank Resident Representative for Poland and the Baltic States. “A key challenge over the short term is to continue supporting the sectors […]. Poland also needs to continue strengthening its institutions to prepare for a new wave of absorption of EU funds, a big part of which will go into low-carbon and greener projects”.

Blue Europe believes that most of the choices taken by the Polish government have been positive, and while the work market will indeed suffer in the next months, the effects won’t be felt on the long term.

Croatia, [3] on the contrary, chose not to lower taxes but focused more on support, especially when it comes to salaries and wages. More than half national companies received support, even sometimes coming to cover up to 70 percent of the expenses. Similar solutions were of course chosen both in Poland, Romania and Hungary, but the extent of such measures have nothing in common with Croatia support politics. This has allowed to an extremely minimal job destruction, all across the sectors.

The European Commission has increased its projection for the growth of the Croatian economy to 6.1% in 2022, meaning it could become one of the fastest-growing economies in the bloc. This year’s forecast meanwhile was slightly reduced from 5.3 to 5%. The Commission expects the Croatian recovery to be primarily based on tourism, increased private consumption, foreign investments, and post-earthquake reconstruction. Increased economic growth for 2022 in Croatia is also expected as a result of the EU recovery and resilience fund.

“This forecast is similar to the one proposed by my government. I find it very encouraging that these numbers are even bigger than initially proposed. That is good news,” commented Prime Minister Andrej Plenković .

Hungary [4] took the same road as well, with a mixed choice among all aforementioned strategies. The first-quarter GDP data took analysts by surprise, as I was forecasted Hungarian economy expanded more in the first three months of the year compared to the previous quarter. On an annual basis, the pace of contraction eased in Q1 from the last quarter of 2020.

Péter Virovácz, head analyst at ING Bank, said the data had surprised even the most optimistic analysts. “The fact that the Hungarian economy was able to show such dynamic growth on a quarterly basis in a quarter which showed a rather mixed picture in advance means that there is a much higher recovery potential in the economy than expected,” he said.

Unlike most other Central EU countries, Hungarian economy might return to its pre-crisis level even before the summer. The latest data clearly shows the strong resilience and recovery ability of the Hungarian economy. Due to the excellent pace of vaccinations and the gradual easing of restrictions, a quick rebound is expected from the second quarter of the year.

The European Commission (EC) is even more optimistic than the Hungarian government: even before the latest GDP data came to light, the EC had raised its growth projections for the Hungarian economy in its spring economic forecast. The EC now predicts 5% annual growth, up from the 4% it said in its winter forecast in February, while the Hungarian government puts 2021 GDP growth at 4.3%. As for 2022, the EC said Hungary’s economy was expected to expand by 5.5%.

There are of course also bad performers. While some are ecstatic when confronted with the expected 6% growth as announced by the IMF, Romania doesn’t seem to be on the path to a speedy rebound from COVID-19. Romania, for instance, has registered without any doubt the biggest company closure of all Central and Eastern EU members, almost the double of Poland in most 2020 data we have so far. 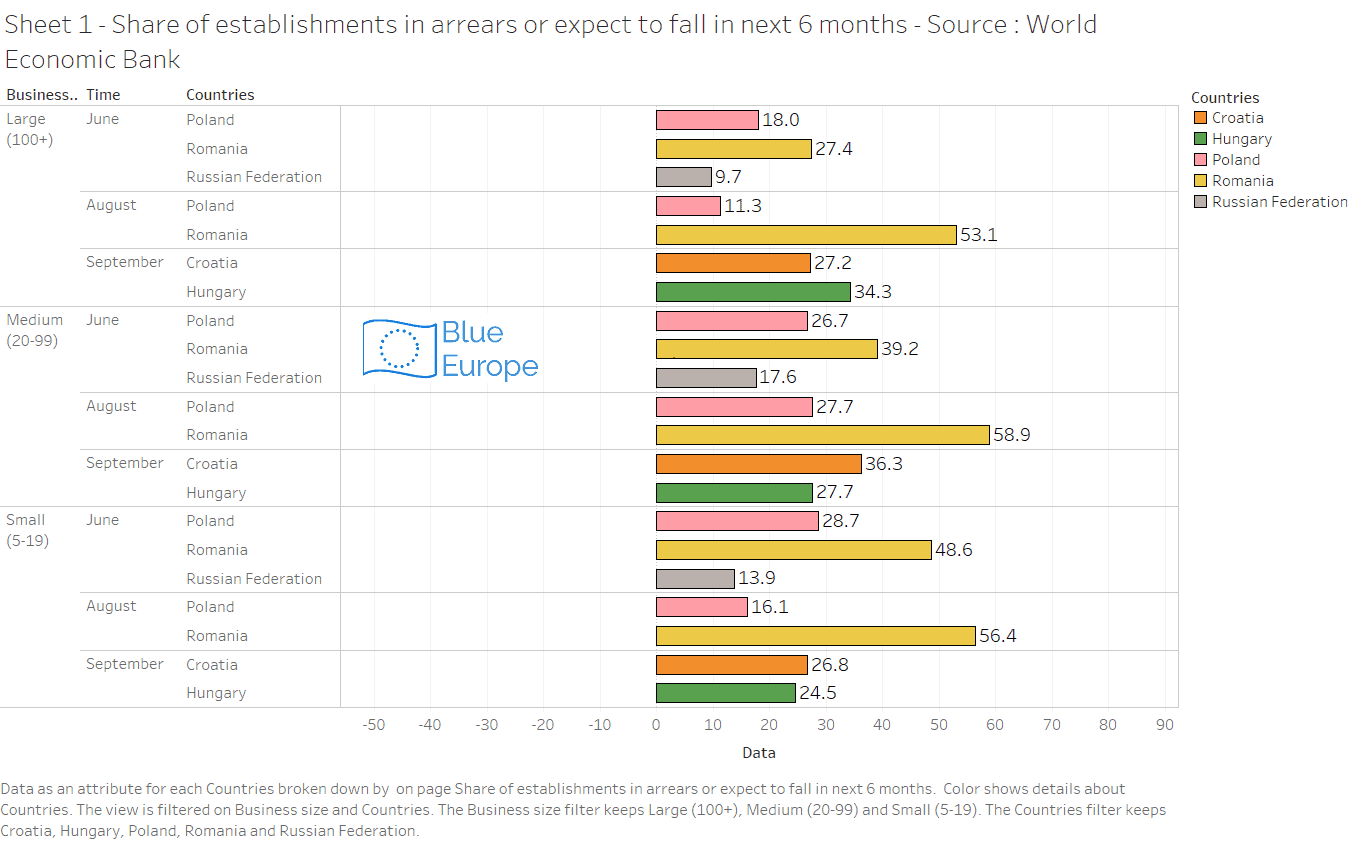 The Romanian economy contracted by 3.9 percent in 2020, a shock that is comparable to that of some European economies with a similar size of the tourism sector such as the Netherlands or Bulgaria. However, the contraction in Romania was substantially stronger than in other countries. For example, Lithuania only contracted by 0.8%, and Estonia by 2.9%. While the sectoral composition of a country cannot be easily changed in the short term, the most thrilling question now is if and how fast the economy will recover from the recessionary shock.

The new projected growth rate for Romania of 6% for 2021 was met with surprise : it was a optimistic that their previous forecast from October 2020, which set Romanian growth at 4.6%. It also makes Romania the economy with the highest expected GDP growth in the region. Hungary, for example, is projected to grow by 4.3%, Slovakia by 4.7 %. We thus asked ourselves: what are the key factors for a speedy recovery and how does Romania fare in this regard? Should we perhaps be more cautious than the IMF?

An inflation blocking any recovery?

However, a important shadows looms over the favourable numbers of recovery we have found so far. European Union annual inflation was 2.0% in April 2021, up from 1.7% in March. A year earlier, the rate was 0.7%. These figures are published by Eurostat, the statistical office of the European Unionand the highest annual rates were recorded in Hungary (5.2%), Poland (5.1%) and Luxembourg (3.3%). Compared with March, annual inflation fell in three Member States, remained stable in one and rose in twenty-three.

That’s not all, as for instance from December 2020 to April 2021, HICP[5] inflation in the eurozone alone jumped from -0.3% to 1.6%, the fastest acceleration in the history of the series. Energy inflation, partly due to COVID-19-related base effects, has accounted for the bulk of the pick-up, along with other special factors, including VAT changes in Germany and Eurostat’s annual reweighting of HICP items.

Upward pressure on core goods inflation is likely in the coming months but given the large output gap and labour market slack, the risk of significant “second round” effects on eurozone wage and unit labour cost growth will remain low. The ECB’s near-term prioriyy will continue to be the preservation of very accommodative financial conditions, therefore, evident in the recent faster pace of asset purchases. In April specifically, the highest contribution to the annual euro area inflation rate came from energy (+0.96 percentage points, pp), followed by services (+0.37 pp), food, alcohol & tobacco (+0.16 pp) and non-energy industrial goods (+0.12 pp). 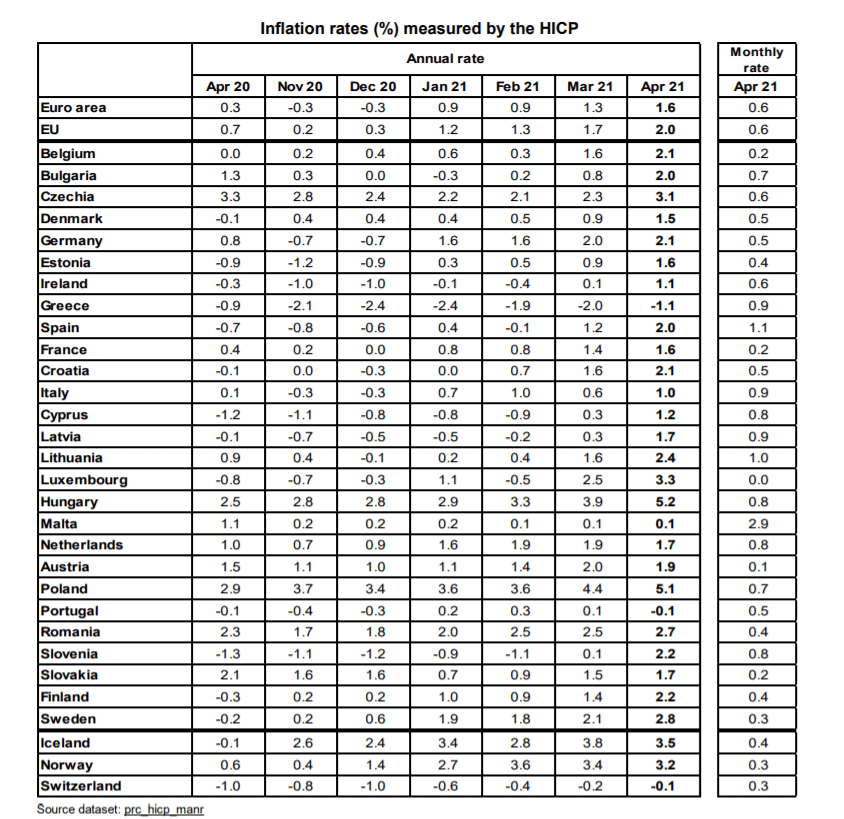 Restarting after Covid restrictions in Central Europe: the examples of Poland, Croatia, Hungary and Romania.