Joao A. – University of Porto, written for the Blue Europe 2021 Contest. Review by H. Horta.

The term “blue economy” refers to any marine-related activities that are sustainable and take place in the sea and coastal areas, such as blue biotechnology, shipping, fishing, and coastal tourism. Every time the Baltic Sea coastal regions properly use the valuable potential at their disposal to establish modern, resource-efficient, and competitive economies, they get closer to being water-smart and climate-neutral communities.

The tourism industry is a major business field, not just in the Baltic Sea Region but all over the world. According to the UNWTO (United Nations World Tourism Organization), tourist arrivals worldwide are expected to rise from the current 1.4 billion (2018) to 1.8 billion per year by 2030. These prospects put the BSR in strong competition with other macro-regions and demand for realignments of internationalisation strategies to both benefit from the positive effects and minimize the negative impacts of growing tourism flows..

The basis for this strong position of the BSR tourism industry is confirmed in a European comparison.

In 2016 three BSR destinations succeeded to be in the top ten destinations of UNWTO (United Nations World Tourism Organization,2017); this includes Germany, the Russian Federation and Poland. Although all three countries only have a fraction of their tourism destinations located along the Baltic Sea coastline, there is a clear indication about the relevance of the coastal tourism for the overall national tourism: in Germany 17 percent of all overnight stays are recorded in the coastal provinces of Hamburg, Mecklenburg-Vorpommern and Schleswig-Holstein while in Poland 43 percent of all overnight stays are generated in the two coastal regions of Północno-Zachodni and Północny. 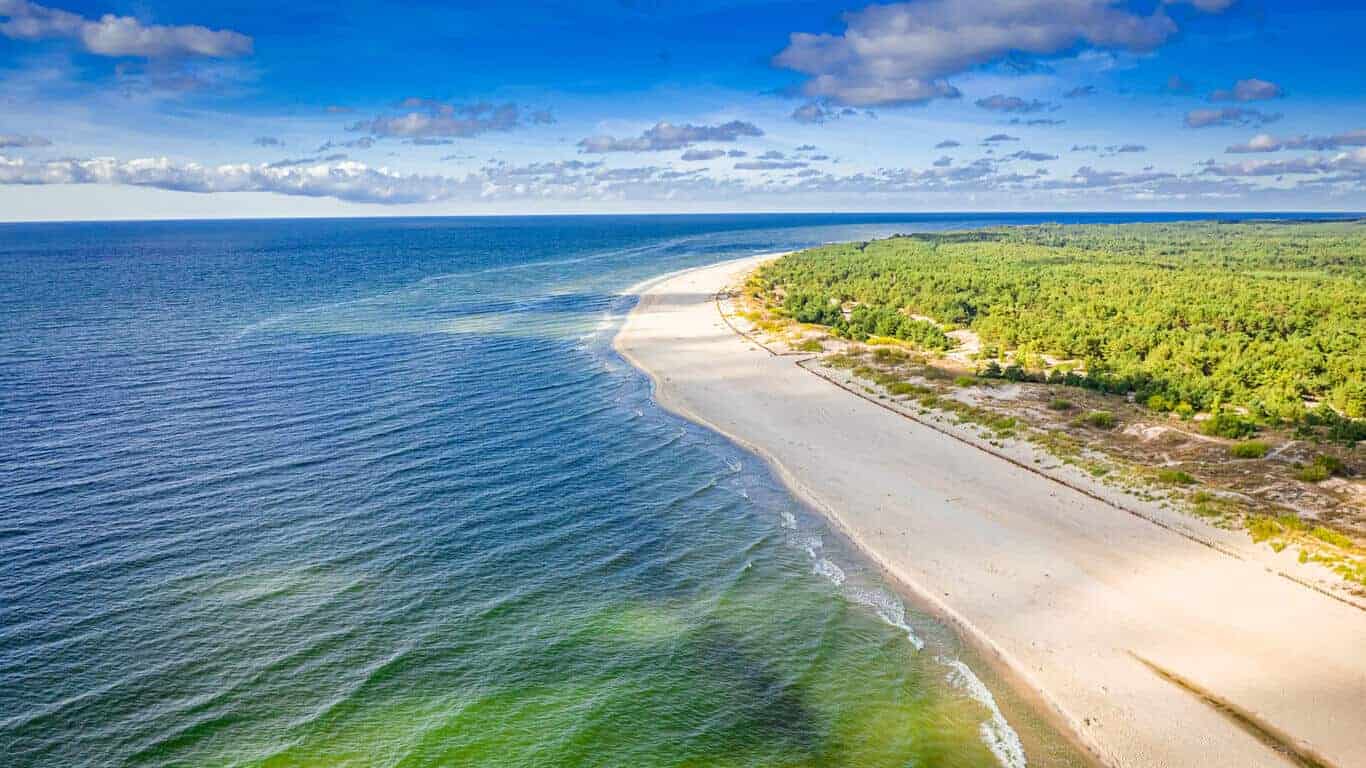 Sustainable tourism: an ecology opportunity in the Baltic States

Combining the resources of the countries in order to solve common issues and take advantage of opportunities that arise for the Baltic Sea region has been and will continue to be critical for the region’s growth and prosperity. The policy intends to improve collaboration amongst Baltic Sea-bordering countries, with three primary goals in mind: protecting the sea, linking the region, and improving prosperity. Tourism in general, and specifically in the Baltic Sea Region, is dependent on long-term viability. The Baltic Sea is a particularly sensitive environment, susceptible to the effects of increased tourism. The archipelago’s environment supports a broad range of habitats and ecosystems, as well as a centuries-old cultural history. The very delicate and interdependent maritime ecology with its distinctive flora and fauna must therefore be safeguarded, and the possible repercussions of tourism development must be thoroughly examined before implementation.

It’s important to remember that sustainable tourism inevitably involves some compromises. It’s possible that promoting local goods in archipelago locations may increase the amount of excursions to the mainland to obtain the necessary foodstuff rather than relying on wholesale purchase. In such circumstances, a trade-off between economic and ecological sustainability must be established. While some industry players may find it challenging to strike a balance between competitive economic activity and environmental and cultural heritage protection, adopting sustainability provides a competitive edge as demand for responsible travel grows. The number of environmentally conscious visitors is gradually increasing, and environmental standards are increasingly becoming a deciding factor when planning a vacation.

For instance, the Footprints of Defence in the Archipelago project (“DefenceArch”), funded by the Interreg Central Baltic 2014-2020 programme, was designed for the development of thematic tourism based on the defense of the archipelagos of Turku, Åland and Stockholm in pilots located at the Gålö seal station, the Bomarsund fortress area, Archipelago Centre Korpoström and the southern tip of the fortress island of Örö. The overall objective of project was to develop existing, though almost untapped defense historical resources of these destinations into appealing and sustainable destinations by increasing the awareness and experience value of the visitors.  At the Bomarsund fortress in Åland, for example, the tourist experience was enriched by providing both information, navigation and guidance via the Coastal Past mobile application developed by the project for its destinations. The goal of the mobile app is to provide useful information on the sites for the tourist in an easy-to-use format. This means not only loading the tourist with ample information and details but also allowing the tourist to experience the sites without harming the natural values by keeping people on the correct routes.

The Swedish Region Västerbotten Turism became a knowledge-based organisation on sustainability for local destination management organisations and tourism businesses. The intervention focusses on lessons learnt implementing sustainable tourism as a regional political organisation. Large city hotels, museums, dog sled companies, fishing providers, cuisines, ski slopes, travel agents etc. have been inspected and a considerable number of local destinations, municipalities and service providers have been assessed. The assessment was based on the criteria of the Global Sustainable Tourism Council (GSTC) – managing the global standards for sustainable travel and tourism. Weave links between the private and public sector and an increased quality of life for local people are first tangible achievements of the implemented process.

Cruising and fishing: development and sustainability

Cruises are a major economic driver in all three ports, bringing in millions of euros in revenue through port fees and passenger spending. Tallinn, Riga, and Klaipda, on the other hand, lack the tourism and cruise-ship activity of Venice and Dubrovnik. Apart from the beneficial economic consequences of tourism, this could be one reason why there is now no unfavorable attitude toward cruise tourists. So far, there has been no organized opposition or rallies against cruise tourism. On the contrary, in some circumstances, a clearly pro-tourism mentality exists.

All three sites want to increase cruise travel in the future. This will be accomplished by increasing the number of calls and capitalizing on the trend toward larger ships. Above all, larger ships unload an increasing number of passengers at once, increasing the likelihood of selective congestion. A sensitive coordination of the interests of the numerous stakeholders is the key to the future development of cruise tourism. These include, in addition to cruise lines, tourism marketing organizations, and, most importantly, the local populace.

Sea trout spend their adult life in the sea but reproduce in rivers. The juvenile fish grow up in the river, and after a couple of years they return to the sea. Therefore, free passage in rivers and suitable nursery areas are fundamental for thriving sea trout populations. However, most, if not all, Baltic Sea rivers are heavily affected by human interventions, e.g. channelisation and constructions such as mills, dams or hydroelectric power plants. This is detrimental to the life of plants and animals in the rivers and has resulted in weak populations of sea trout and other river dwelling animals. “An investment in the environment is an investment in the tourism business”, explains Håkan Häggström, a biologist and lead partner of the Interreg project RETROUT  “By restoring river habitats to more natural conditions, fish populations can increase, which attract more angling tourists.”

However, ongoing environmental degradation, such as coastal erosion and eutrophication, puts these functions at risk. By surveying 4 800 people in Finland, Germany, and Latvia on how improvement or deterioration in various environmental quality attributes would affect future visitor intent, this study investigates how potential future changes in environmental conditions would affect the recreational benefits provided by the Baltic Sea.

Environmental elements play a large role in the number of recreational journeys to Baltic Sea locations, according to the research, and changes in quality aspects have a mixed effect on visit counts. For Latvian respondents, for example, lowering water quality by one defined level would reduce the expected number of visits by 27%, while raising water quality by one defined level would only increase visit numbers by 9%. In Finland, declining water quality in terms of blue-green algal blooms and onshore algae, as well as lowering water clarity in Germany and deteriorating water clarity and blue-green algal blooms in Latvia, had a negative influence on expected tourist numbers. Degradation of the environment appears to have a stronger impact on these characteristics than improvement. Reducing the amount of amenities at Baltic Sea sites also had a significant negative impact on predicted visitor numbers in Germany and Latvia.

The average environmental conditions at respondents’ most-visited Baltic Sea site varied depending on country and quality criteria. Overall, German respondents thought the environment was better than those in Finland and Latvia; nearly 80% of German respondents thought water was clean or somewhat clear, compared to 66% in Latvia and 38% in Finland, with similar patterns for all other environmental parameters. Because there are no discernible differences in actual environmental quality, this could be due to German tourists being less attached to the Sea’s environmental state due to their greater average distance from it (given the country’s size), or water quality at substitute sites in Germany being lower than in Finland (although the researchers acknowledge that these possibilities are speculative). When considering the effects of improving or deteriorating environmental quality, this perception is important: German respondents may react more strongly to decreasing water quality because it represents a greater ‘loss,’ whereas Finnish respondents would gain more value from increasing water clarity.

The findings show the importance of coastal leisure and how these values fluctuate as environmental conditions in marine areas change. The findings, as well as the shown contingent behavior methodology, could be utilized to inform national and regional maritime policy and guide marine spatial planning, according to the researchers. However, the study does not provide a consistent picture of whether the number of visits would respond more strongly to deteriorations in environmental conditions than to improvements, necessitating future research.

Henrique Horta, graduated from Lisbon’s ISCTE-IUL university with a masters in International Relations, the thesis focusing on Ukraine’s accession to the EU. With knowledge of demography, political science and history through his bachelors, Horta also knows Portuguese, Spanish, French and English, giving as well a more Atlanticist view of Central Europe.